ChatOps is a term used to describe bringing development or operations work that is already happening in the background into a common chat room. It involves having everyone in the team in a single chat room, then bringing tools into the room so everyone can automate, collaborate and see how automation is used to solve problems. In doing so, you are unifying the communication about what work gets done and have a history of it happening.

ChatOps can be supplemented with the use of tools or scripts exposed using a chat bot. Users in the chat room can talk to the bot and have it take actions on their behalf, some examples of this may be:

Bots can also be a great way to expose functionality to low-privledged users such as help desk staff, without having to create web interfaces or forms.

If you want more details on the concept of ChatOps, I recommend watching ChatOps, a Beginners Guide presented by Jason Hand.

A popular toolset for ChatOps is Slack as the chat client, and Hubot as the bot. In this post we will use Slack and Hubot together with a PowerShell module I’ve written called PoshHubot. The module will handle installation and basic administration of Hubot. From there, we will integrate Hubot with PowerShell so we can perform some ChatOps in the Microsoft ecosystem.

There are a few basic Hubot concepts I want to introduce to you before we continue.

Hubot is built in CoffeeScript, which is a programming language that complies into JavaScript. Hubot is built on Node.js. This means the server running the bot will need to have Node.js and CoffeeScript installed. The PoshHubot module will handle this.

When writing scripts for your bot, you will have to get your hands a little dirty with CoffeeScript. We will be calling PowerShell from inside CoffeeScript, so we only need to know a tiny bit to get by.

Hubot scripts make heavy use of environment variables to set certain options for the bot.

One example of this is to allow the Hubot to access sites with invalid SSL certificates, you would set an environment variable of NODE_TLS_REJECT_UNAUTHORIZED.

There are 3 possible ways to do this:

Hubot has a brain, which is simply a place to store persist data. For example, you could write a script to have Hubot store URL’s for certain services, which you could append to via chat commands. You want these URL’s to persist after Hubot reboots, so it needs to save them to its brain.

There are many brain adapters for Hubot, for example MySQL, Redis and Azure Blob Storage. For this blog we install a file brain - which will just store the brain as a .json file on the disk.

You will need to a have a few things ready to get a Hubot setup with Slack:

Create a Slack Integration for Hubot

To have Hubot communicating with Slack, we need to configure an integration. From Slack: 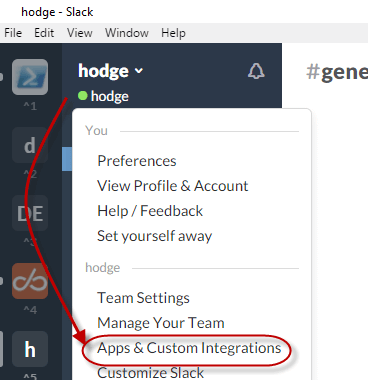 After the integration has been added, you will be provided an API Token, something like xoxb-XXXXX-XXXXXX. We will need this later so note it down.

Additionally, you can customize your bots icon and add channels at this screen.

Install the PoshHubot module in one of two ways:

Once installed, we are going to create a configuration file that PoshHubot will use.

Next, we need to install all the required components for Hubot, which will be handled by the Install-Hubot command.

This will install the following:

Hubot comes installed with some default scripts which are not required when running on Windows. We can use the Remove-HubotScript command to remove them.

There are many third party scripts available for Hubot to extend its functionality. You can search for them on the Node.js package manager site or on GitHub. We will use the Install-HubotScript function to install some useful scripts.

Before we can start our bot and connect it to Slack, we have to configure the environment variables required by the scripts we are using. A good way to find out what environment variables a script is using is to look it up on GitHub. For example, the jubot-brain-file script requires FILE_BRAIN_PATH to be set. 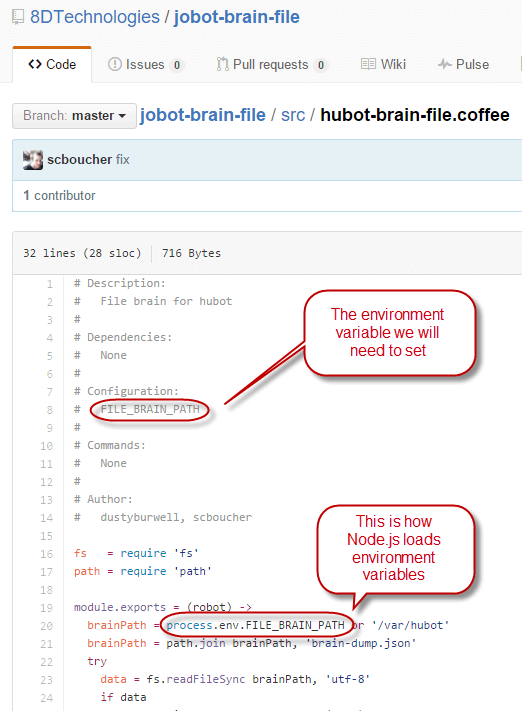 Additionally, the Slack adapter for Hubot requires an environment variable to be set for the Slack API token called HUBOT_SLACK_TOKEN.

We will store both of these in the config.json file we created earlier.

Open the C:\PoshHubot\config.json file and in the EnvironmentVariables section, add the new environment variables.

The completed config.json file should look something like this:

With all the configuration in place, we can start Hubot.

Open up Slack and see your bot online! If for some reason your bot doesn’t connect, you can find the logs in the LogPath defined earlier in the config.json file.

Hubot comes with some built in commands, so you can directly message your bot with help and see if you get a response back.

If you want your bot to join certain channels, you can enter /invite @bender in Slack to bring him into the channel. To have Hubot perform commands, you need to address him in the channel. Try a @bender pug bomb me. 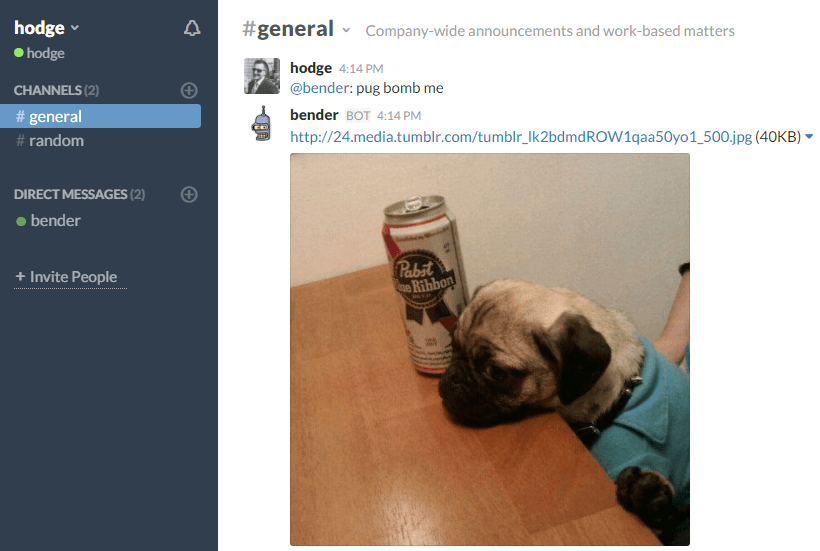 We have our Hubot joined to Slack and we have triggered a few pug bombs, but it is time to do something useful - create our own script.

The Hubot documentation covers scripting in detail and I recommend giving it a read before continuing on.

We are going to write a basic script to find the status of a Windows service on the machine hosting the Hubot. The plan is:

Edge.js and Edge-PS are Node.js packages which allow calling .NET and PowerShell (among other things) from Node.js.

To use them inside Hubot, we need to add them to the package.json file which is generated when we install Hubot for the first time. You can find package.json in the BotPath specified above, in our case it is C:\myhubot\packages.json. We will also add a version constraint. The latest version of each package can be found by searching the npm package manager.

After you have added them your package.json should look similar to this:

Usually, after you update the package.json, you would need to run npm install to download the packages that have been added. This is handled behind the scenes for you by the Start-Hubot command.

Keeping these methods in mind, I created a Get-ServiceHubot function to find the service status:

I am applying some Slack formatting in my output, including the use of asterisks around words for bold and back ticks for code blocks. You will notice there are double backticks in the code so PowerShell does not interpret them.

Here is some example output from the PowerShell when the function is run against a service that exists:

Here is some example output from the PowerShell when the function is run against a service that doesn’t exist on the machine:

Save the PowerShell function into the scripts folder in the Hubot directory. In my case I will be saving it to C:\myhubot\scripts\Get-ServiceHubot.ps1

Now that our PowerShell function is completed, we need to wire it up to Hubot using CoffeeScript.

The goal for the CoffeeScript portion is to take a users message to the bot, work out the service name, pass it into the PowerShell script and return the result to the user.

This is the script I designed to call the PowerShell function. Be sure to read the comments so you understand how it works.

Save the CoffeeScript into the Hubot scripts directory as well, in my case this will be C:\myhubot\scripts\get-servicehubot.coffee.

To load the script into Hubot, you need to restart the bot:

You will notice that npm installs the Edge.js dependencies we added in the package.json.

Check the logs in LogPath defined earlier in the config.json file to make sure that Hubot started successfully and loaded your script. You should see a line in the log file like this:

When your bot joins the channel, ask it for help again. You will notice that the get service command has been added to the help. This is done automatically when you fill out the header part of the CoffeeScript script.

Now you can try some get service <service> commands and see the results:

Hubot with PowerShell is a fantastic way to bring automation to your environment. With a tiny amount of CoffeeScript you can take your pre-existing PowerShell functions and make them available in a chat channel for anyone in your team to access. This is especially useful for allowing people in your company to access information on-demand from places Operations teams may only have access to.

I’d love to hear about the cool scripts you come up with when leveraging Hubot and PowerShell! Tweet me @matthodge.