I am in the process of writing up some blog posts about working with PowerShell Desired State Configuration (DSC) and OpsCode Chef from a Windows Workstation / Windows Server perspective.

This first article will cover the steps required to setup a development environment for someone that is doing work with PowerShell Desired State Configuration (DSC) or OpsCode Chef.

We will be covering the following:

Once everything is installed, we will be customizing and setting up the following:

The first step is to install the tools and applications we need. The easiest way to do this is with a combination of Chocolatey and OneGet which is now built into Windows 10.

Now that you have installed PoshGit, it is a good idea to take a look at your PowerShell Profile.

You can make any sort of customization you like, but here are two suggestions for things to do in your profile:

I have posted my PowerShell profile on GitHub as an example here.

My profile contains some useful functions for setting and reloading environment variables which I recommend you use in your own profile.

With many of the tools used for developing with Chef on Windows, they will require a correctly configured Path environment variable.

If you are using the functions from my PowerShell profile from above, it is very easy to add Path environment variables:

If you move around to different machines, it is a good idea to move your your PowerShell Profile into a synced directory like Dropbox or OneDrive. From there you can create a symlink from the profile .ps1 in the synced path to the $PROFILE path.

Atom is a great text editor which I like to use for everything but working on PowerShell scripts. It is my editor of choice for modifying Chef recipes.

We can make it more powerful with some additional packages.

You should be using source control for your Chef recipes and PowerShell scripts. Warren Frame has an excellent blog on the topic specific to PowerShell here.

Vagrant is an excellent way to test your DSC scripts or Chef recipes.

I like to use 2 boxes for my Windows 2012 R2 and Ubuntu testing with Chef/DSC. There are also several plugins that make using Vagrant even nicer.

We will install some plugins and pre-load the Vagrant boxes:

Next step is to get your chef user.pem file sorted out. Chef has a how-to guide for this here.

Once you have your .pem file, we will setup the knife.rb and the berkshelf config.json.

The default theme for the PowerShell ISE is boring, lets spice it up with a theme. There is a great repository with PowerShell ISE themes located on GitHub.

To import the themes into the PowerShell ISE, go to Tools > Options > Manage Themes > Import. 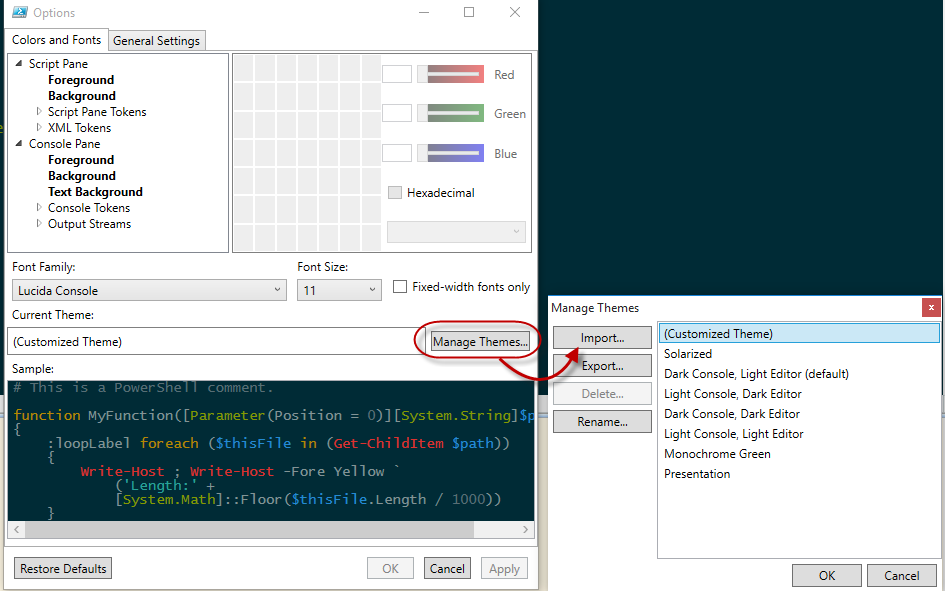 Again, I would drop the theme into a synced folder so you can use it on all your machines.

With that, you should have your Windows machine setup PowerShell DSC and Chef development. Did I miss anything? Send me a tweet @matthodge and let me know!